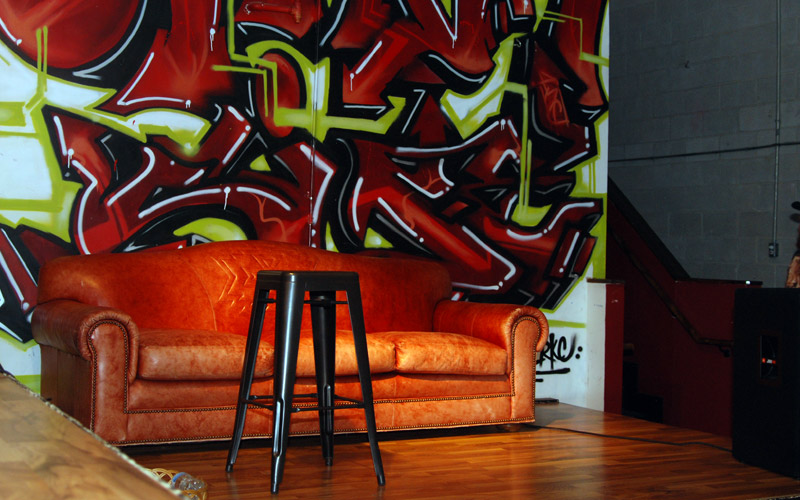 Last week, I performed at a disaster of a gig. I’m not going to name the location, for two reasons: (1) the owners were sweethearts of folks who just happened to know nothing about comedy. (2) this isn’t about trashing a business, it’s about providing information. The owners wanted to give comedy a try, but made the mistake of believing their responsibilities ended with hiring two comedians for the night.

Basically, the venue—a dance club—held what’s known as an “Ambush Show.” They decided they wanted to have a comedy night, but create an environment conducive for comedy, and they didn’t tell their customers about the show.

Comedy was slated to start at 10 PM. The opening act—Terry—and I arrived at 9 PM. We were greeted kindly by the owners, and then we made are way to the back to await showtime.

As 10 PM both approached and passed, Terry and I became slightly wary. The music was loud, the televisions were on, and the customers weren’t sitting at tables facing any sort of stage; they were meandering around the club shout-talking at one another over the music. The manager was chatting with regulars; the owner was playing pool with his friends.

At 10:15 PM, the owner made his way over to us and said, quite genially, “You guys can get started whenever you want.”

We had been waiting for our cue—for the owner (or an employee) to make an announcement, “Welcome to comedy night!”—but that never happened. Instead, one moment everyone was talking loudly over music, the next moment they were talking loudly over Terry.

Terry announced his presence with a “Hello!”, thanked everyone for coming, and asked who was ready for a comedy show.

He was met with resounding indifference.

Everyone at the bar had their back to him, and no one at the tables so much as looked up from their conversations. Conversations that, for the record, were collectively louder than the PA system, meaning the audience was drowning out Terry.

The owner, again, a nice fella, returned to his game of pool. He didn’t turn off the televisions, or turn off the lighting on the dance floor. In fact, not only was the dance floor lighting not turned off, no stage lighting existed at all. Standing in the “Comedy Corner,” Terry was surrounded by darkness; nothing made him stand out from all the other dark corner of the bar.

At 11:45 PM, the room was packed, and not a single person was paying attention to me. Mercifully, at that time the owner said I’d fulfilled my contract and turned the music back on.

Afterward, as we drove home, Terry and I laughed about everything we’d just experienced.

When you give a bad performance, you beat yourself up over it. But this wasn’t a bad performance, this was an… well, a line I ad-libbed explains it: “You know, I’m all for women’s rights, but part of me hopes Kavanaugh does overturn Roe v. Wade when he gets on the Supreme Court, because then shows like this will be illegal.”*

So, all that said, if you’re planning on having a comedy show, here are a few tips to give it a fighting chance.

Charge a cover.
When you let people in for free, you send the message: “This show has no value.” If something is valueless, then why would anyone want to pay attention to it?

Isolate the comedy.
If you’re a restaurant, don’t have comedy compete with people having dinner. If you’re a dance club, put comedy in the back room. Don’t have your comedy show intermingling with your main business.

Turn off your televisions.
It seems like a no-brainer, but sometimes people think, “Well, some people can watch comedy, and others will watch TV.” It doesn’t work that way. People need to be told to focus; you can’t obvious distractions. Comedians are already fighting against the phones in everyone’s hands; adding screens to the environment when they look up doesn’t help.

Have decent lighting.
Almost anything will do; it doesn’t have to be a lighting rig, or stage lighting. Something to differentiate the performance area from the rest of the room.

Make an announcement.
You have to tell your customers what’s happening. If you’re the owner, get up there and tell people you’ve scheduled comedy. Or, even better, have your bartender tell the masses. Trust me, when the bartender talks, people listen. If they’re out from behind the bar for 45 seconds, people will take note.

Have your guests facing the stage.
If you just leave your tables scattershot throughout the room, you’re not creating the sense of a show.

Start at a decent time.
The dance club started their show at 10 PM, because, quote: “That’s when our crowd comes out.” But that’s their dance club crowd, not a comedy show crowd. When people showed up, they showed up to listen to music and hang out, not have some idiot with a microphone yap at them. If your venue has regulars, work the show around them. A restaurant could schedule a show for 9 PM, after the dinner crowd leaves. The dance club should have had their show at 8 PM, before their dance crowd arrived.

Do a sound check.
Your customers have to be able to hear the comedian in order to have a good time.

Spread the word.
Even if it’s only on social media, get the word out there.

Seat your customers.
When you go to a movie, it’s OK if people are scattershot all over the theater. At a comedy show, the more people up front and by the stage, the better.

I’m sure there are more nuggets of wisdom out there, but those bullet points create a nice foundation for your comedy show.

Comedy, isn’t effortless. If you’re new to the game, making rookie mistakes might sour you on comedy when in fact it could be a great money-maker for you. Get the setup down correctly right out of the gate, and you won’t waste any time—or leave money on the table—trying to correct your mistakes.

Not as serious as Plato, but lighter than Socrates. Not as edgy as Clinton, but livelier than Nixon. Not as heavy as GWAR, but deeper than Culture Club. Nathan Timmel is a stand-up comedy veteran, masterful storyteller, and headliner with over a decade of experience behind the mic. Nathan finds the absurdity in everything from making babies to overcrowded prisons, creating comedy that’s intelligent, fun, and engaging (with a sprinkling of raucousness).