Funnier By The Lake Comedy founder, comedian Larry Bloom, has been writing jokes and making people laugh his entire life. Growing up, north of Chicago, in Wilmette, Illinois, what interest—and talent—Larry lacked in sports, he made up for with a passion for the stand up comedians, and characters from movies and television, of the 60s, 70s and 80s. While most kids wanted to knock a baseball out of the park, Larry dreamed of performing biting observational humor, like George Carlin, or the uninhibited physical comedy of Steve Martin, and sitting down with a dry martini and effortlessly cracking wise like Hawkeye Pierce on M*A*S*H.

Larry was a remarkably horrible high school and college student, and he often says that if those years were a book, it would be titled, Fear and Loathing on Campus. In school, he excelled at distracting himself and others from the tasks at hand, like studying, with humor, while amazingly earning a degree in Sociology and Fine Art.

As an entrepreneur and speaker, Larry’s ability to integrate humor with business has always been an advantage, creating memorable experiences for clients and business groups.

Larry’s stand-up comedy springs from a lifetime of experiences and a view of the world seen through a comedian’s filter, in which humor can be found in everything and nothing is off-limits—unless it’s not funny. He can be seen performing on stages at venues and special events throughout the Chicago area. 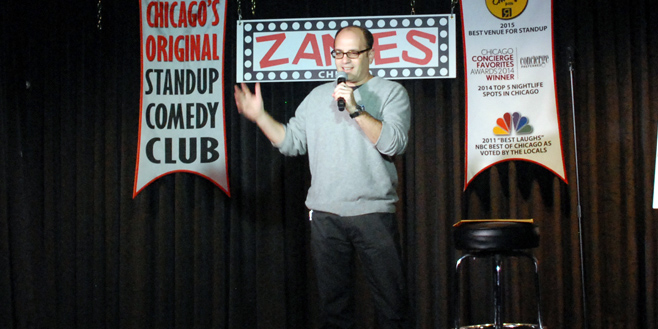 Recently, comedian Larry Bloom created Funnier By The Lake Comedy (FBTL) to provide stand-up comedy for social and corporate events, and services such as humorous writing for presentations, publications and blogs.

Through FBTL, Larry has made it his mission to bring live comedy to the North Shore. He also produces and promotes a number of showcases and dinner-and-a-show events each month, throughout the Chicago north suburbs.

Promo clips of Larry Bloom of Funnier By The Lake Comedy on stage.