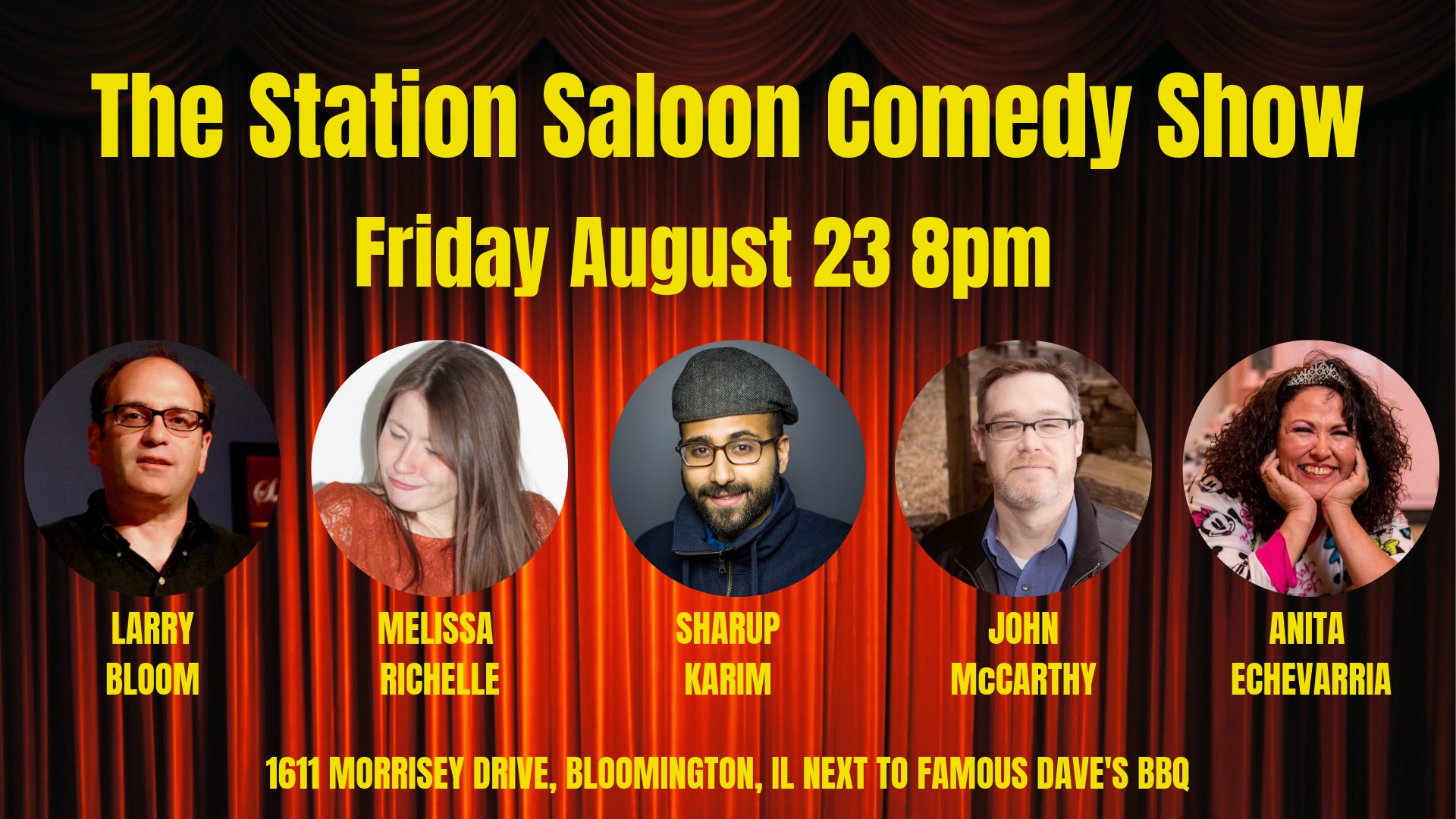 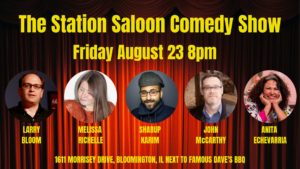 This is not a Funnier By The Lake Comedy show, but includes FBTL founder and comedian, Larry Bloom…

BLO-NO COMEDY IS BACK AND WE’RE BRINGING THE FUNNY!

Blo-No Comedy & Palma Entertainment have teamed up again to bring you more laughs to the Station Saloon!

Seating will begin at 7pm and the show will start at 8pm.
Tickets are $15 cash at the door or you can save a bit of moolah by buying your tickets for $10 + a small credit card fee at the provided link below.

Headliner – Sharup Karim
Sharup Karim is a nationally performing South Asian American standup comedian who has become an established fixture in the Chicago comedy scene and was selected as a featured performer at the 2019 NBC Break Out Festival at Second City. He has also performed at House of Blues Chicago, The Laugh Factory, Zanies, The Comedy Bar, and has been featured at LaughFest Grand Rapids, the Milwaukee Comedy Festival, the Flyover Comedy Festival in St. Louis, the Solocom Festival in New York City, and the world-renowned Fringe Festival in Edinburgh, Scotland. He is currently a co-producer of the monthly show “People of Comedy” and is part of ongoing tour titled “Outcasted Comedy” that has been to several cities around the US including two recently sold-out shows at Chicago’s Steppenwolf Theatre.

Feature – Melissa Richelle
Melissa is a Chicago based stand up comic whose sets deal with relationships, being a female, and race. Her sprinkled in vulgarity is just enough to let you know although she is very sweet, she is also hella fun.
She has opened for Loni Love, Godfrey, Brent Morin, Jason Collings and performed at The Improv, Zanies, Jokes and Notes, and other clubs around the Midwest. Melissa was the first female to win Snubfest and has been a part of The Burbank Comedy Festival, and headlined the Chicago Women’s Funny Festival. Find out more at www.MelissaRichelle.com

Feature – John Johnnypants McCarthy
Johnnypants is from Springfield, IL, where he often features at Donnie B’s Comedy Club. He began stand-up comedy years ago as a way to avoid doing actual “work” for a living. He has shared the stage with stand out performers such as Donnie Baker, Marc Price(Skippy from Family Ties), Kevin Farley, Mike Armstrong, Pauly Shore and many others. If you are a fan of puns, then Johnnypants is the comedian for you! If not, you will be, since over the years all his fans have “groan” to love him. He has become known to many as their favorite “hardcore pun star.”

Opener – Anita Echevarria
Anita Echevarria, is a comedian from Central Illinois and has been dubbed the Internet sweetheart. She has a a viral video with over 2.1 million views. She’s been performing for 3 years and has performed in New York City, Connecticut, Indiana, Missouri, Alabama and Florida. Shes working with Bob Levy, Chris Abel’s and Dino Bonilla on a project called Levyland SyndicateRadiotv.com She spends her spare time hunting mushrooms and baking cookies.

Opener – Larry Bloom
Larry Bloom has been writing jokes and making people laugh his entire life. Growing up, north of Chicago, in Wilmette, Illinois, what interest—and talent—Larry lacked in sports, he made up for with a passion for the stand up comedians, and characters from movies and television, of the 60s, 70s and 80s. Larry was a remarkably horrible high school and college student, and he often says that if those years were a book, it would be titled, Fear and Loathing on Campus. Larry’s stand-up comedy springs from a lifetime of experiences and a view of the world seen through a comedian’s filter, in which humor can be found in everything and nothing is off-limits—unless it’s not funny. He can be seen performing on stage throughout the Chicago area. Through Funnier By The Lake Comedy, Larry has made it his mission to bring live comedy to the North Shore.

Host – Khamandi Johnson
Khamandi is a Chicago based comic who now lives in Bloomington and has been blowing the roof off of comedy clubs, night clubs, and lounges throughout the MIdwest.