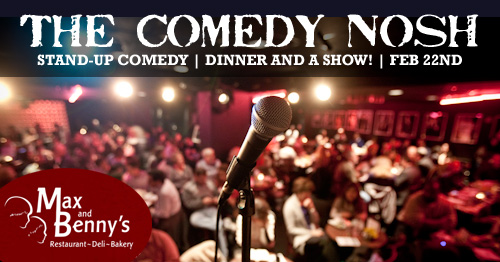 For the last year, corned beef and comedy have gone hand in hand at Max and Benny’s Restaurant in Northbrook. Imagine matzo ball soup, a gigantic Reuben sandwich, a massive piece of chocolate cake and even a glass of wine or beer, all while enjoying a night of professional stand-up comedians and delicious humor. Welcome to “The Comedy NoshTM.”

“The Nosh” is co-hosted by Larry Bloom of Funnier By The Lake Comedy (funnierbythelake.com) and Ricky March of Best Corporate Comedy (bestcorporatecomedy.com), which produces corporate events and private parties. Together, they have consistently “served something funny,” usually on the fourth Thursday of the month to a room regularly filled to capacity. February marks the one-year anniversary of a concept that Bloom originally brought to Max and Benny’s President Ben Schlan.

The first “Comedy NoshTM” was “beyond sold out” with requests from patrons for additional shows. Bloom and March knew they were on to something – that a dinner/show package was a great way to fill the seats on slower nights and bring in new customers. Schlan agreed and the “The Nosh” took off from there. 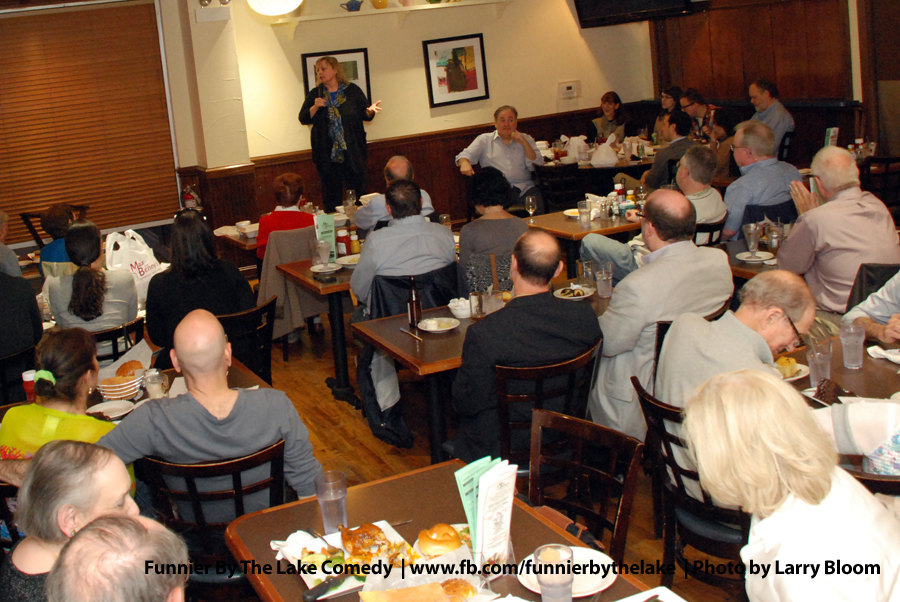 Michelle Krajecki performing stand- up comedy at The Comedy Nosh in 2017.

Self-described “shameless promoters” with a passion for comedy, Bloom and March are always looking for new venues to test the dinner-and-a-show concept. Max and Benny’s was the first dinner showcase and was so successful that others soon followed: the Claim Company in Vernon Hills brought “Lodes of Laughs” to its venue, and the newest showcase, “The Comedy Flight,” launched last month at Cellar Gate, an intimate wine bar in Highwood. Dinner showcases are in the works for other venues around the North Shore as well.

All the performers at Max and Benny’s (as well as the other venues) are professional comedians from Chicago and the surrounding suburbs and are vetted and paid for their performances. They have taken the stage at well-known venues in Chicago, including Zanies, The Improv and Laugh Factory. Most have trained at or are graduates of The Second City and others have studied at I.O.Theater. Many regularly tour nationally and include notable local performers such as author, speaker and comedian, Jenniffer Weigel; veteran Peter Lipsey, the “North Shore One-Liner King;” and up-and-coming talents Jim Flannigan and Kristen Lundberg, to name a few.

What is also unique about the shows is that they all have an equal number of women and men performing, which is one of Bloom’s personal goals for Funnier By The Lake. “Inequity in booking is an issue in the comedy industry. Often a lineup will include one woman. I have received very positive feedback from comedians, audience members and venue owners on my efforts to always create a diverse lineup.”

Bloom, along with March, is committed to building a professional comedy community outside of Chicago, using stand-up to transform the North Shore into a destination for people to enjoy a traditionally “Chicago” amenity close to home. Max and Benny’s is helping to do just that.

So enjoy a little comedy with your corned beef! 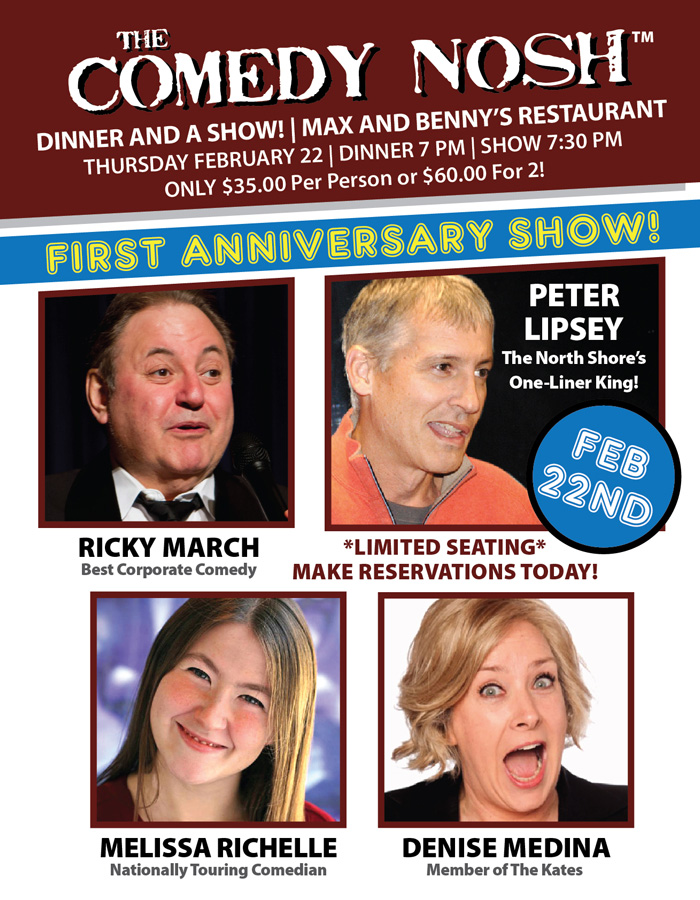